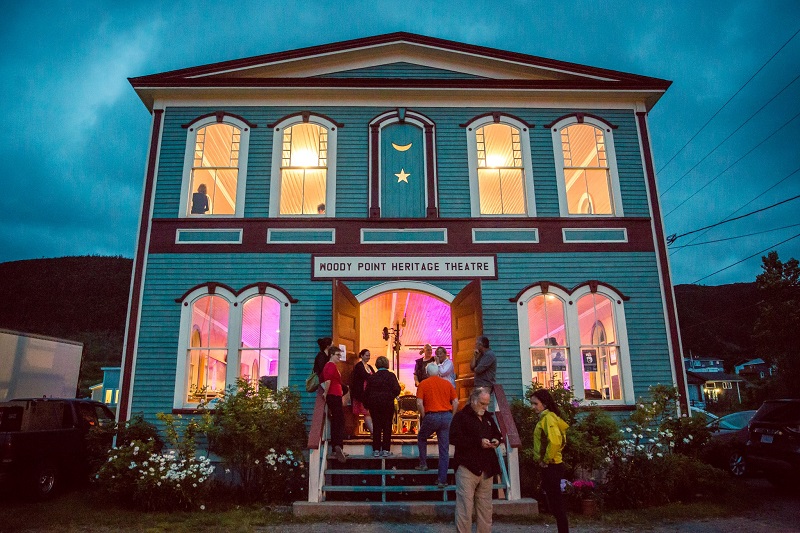 Many visitors to the picturesque town of Woody Point stop to take pictures of the beautiful Woody Point Heritage Theatre. Now a landmark in the community, it was in danger of falling down just a few years ago, but developments in recent years have given it a new lease on on life.

Built in 1908 for the Loyal Orange Society, it served as one of the finest Loyal Orange lodges in the province, and played an important role in community life in Woody Point, hosting dances, meetings, weddings, and other social events. Eventually it was abandoned and left in disrepair for many years. In the late 1990’s it was purchased by local musician Charlie Payne and his wife Joan, who lovingly restored it, renamed it the Woody Point Heritage Theatre, and offered it as a venue for community events. Since 2004 it has hosted the Writers at Woody Point literary festival, as well as plays, concerts, weddings, family reunions, and many other events. Audiences and performers alike have raved about the acoustics and the ambience. Renowned writers that have read from its stage include Michael Ondaatje, Alexander McCall Smith, Louis de Bernieres, and Richard Ford, and such well-known musicians as Sarah Harmer, Alan Doyle, Sylvia Tyson, Amelia Curran and Ron Hynes have performed there. It has become, as in its early years, a focal point for the community.

Now, a new phase in the history of the building has begun.  In 2012 it was offered up for sale, and with the help of the Gros Morne Co-operating Association and ACOA, it was purchased by the Friends of Writers at Woody Point, the not-for-profit group that runs the festival. It will serve as the home base for that festival, but will be available as a venue for other musical and theatrical presentations, and can be rented as workshop or meeting space for community events, weddings, family reunions, wellness group activities, exhibition space, corporate retreats, etc.

The new owners are aware of the significance of this building as a provincial heritage structure, as well as its role in the history of the community, and hope to ensure that well into the future. Friends of Writers at Woody Point have established a Woody Point Heritage Theatre Building Fund, and tax-deductible receipts will be issued to donors. To find out more about the Theatre or to book an event there, contact Gary Noel, Executive Director of Friends of Writers at Woody Point, at .