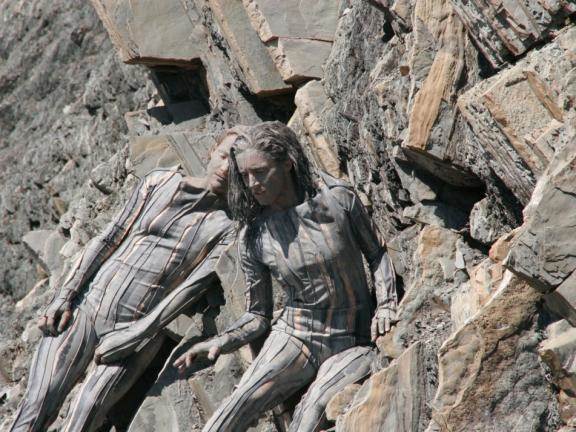 In 2006 the Coleman Lemieux Compagnie collaborated with the community of Cow Head to create an on-site dance work celebrating the land and sea and people in the Gros Morne region. The event was captured by filmmaker Anne Troake.

Feel the Earth Move: the Gros Morne Project, documents the dance company’s cultural exchange with the people of Cow Head and the spectacular one-of-a-kind performance at Green Point, Gros Morne National Park. Along with other examples of Troake’s films, Feel the Earth Move is available to view on Vimeo:

Anne Troake works as a choreographer, filmmaker, costume and graphic designer as well as a performer in dance, theatre and comedy. Her films include the quirky Pretty Big Dig (2003), a short film featuring a choreographed dance of steam shovels, and the documentary exploring her family connection to Newfoundland’s seal hunt, My Ancestors Were Rogues and Murderers (2005).

Founded in Quebec in 2000 by individually renowned dancers/choreographers Bill Coleman and Laurence Lemieux, Coleman Lemieux & Compagnie (CLC) has distinguished itself by its innovative, unbridled artistic vision. CLC creates, produces and presents varied works on a local, national and international scale.