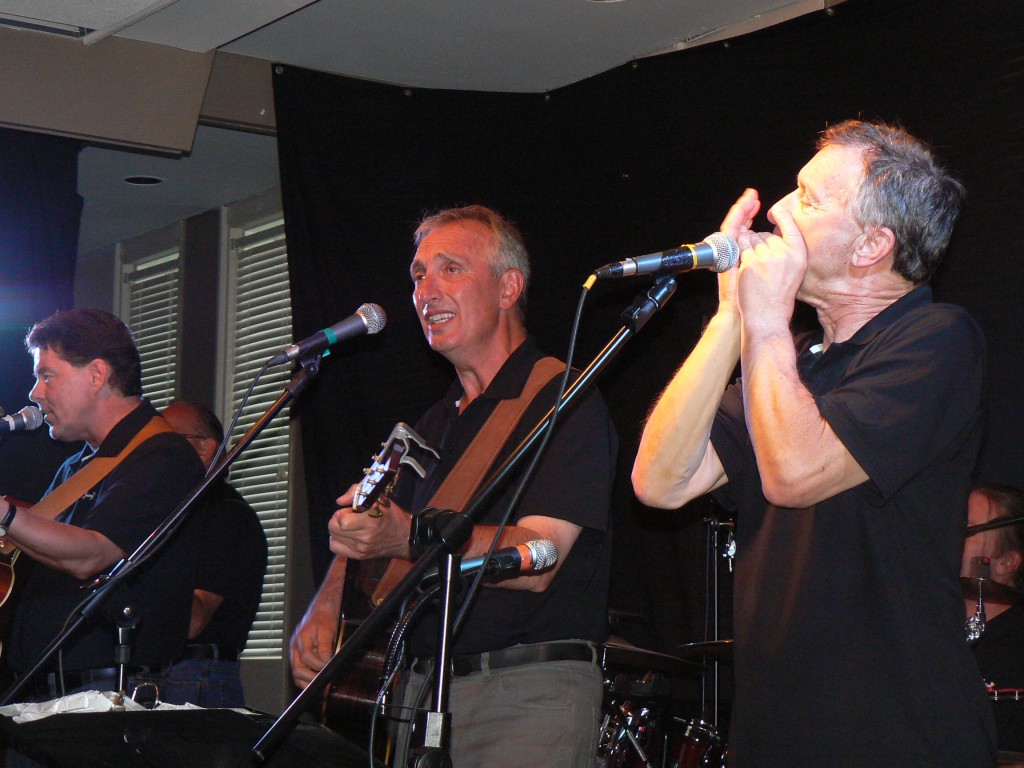 A band that captures your heart… hook, line and sinker.

The Anchor Room Bar is packed with people, every seat is taken. The waitress’ twist and weave around tables like a snake through the jungle grass, serving cocktails to the patrons who wait with excited anticipation. Being told the show is a “must see” while visiting Gros Morne, National Park they are ready to experience it for themselves. The band members gather together behind the crowd to do their ritual shot before taking to the stage. They smile at each other, this is what they love to do. The smiles grow bigger as they walk on stage and pick up their instruments, the crowd can’t help but smile too. You can see their passion for music as they play. The audience can feel it. 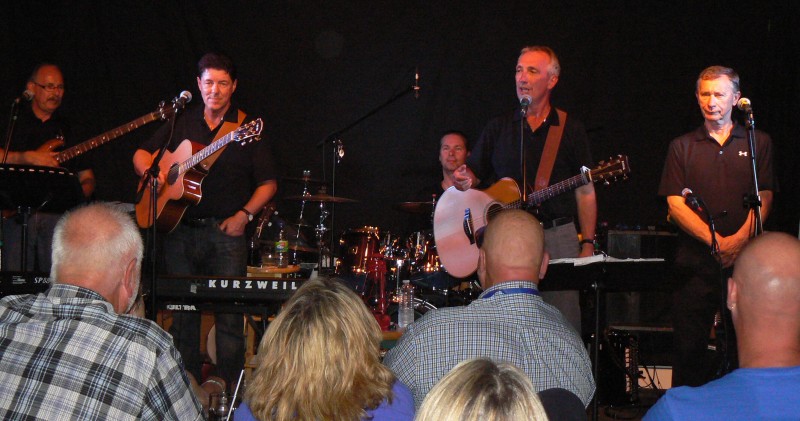 The audience becomes the sixth band member. Anchors Aweigh gets people singing, clapping, dancing and laughing. You are not just watching the performance; you become part of the performance. That is something that people do not forget.

“People are always coming up to me to shake my hand or throw their arms around me saying how much they loved the show last year, or even two years ago, that it was one of the highlights of their trip and that they still tell people about it,” Mike Mc Donald, the drummer, explained.

“I have seen the show three times and it gets better every time,” explained Jeff Organ an audience member from Norris Point.

Anchors Aweigh is so much more than just a band, it is an experience. They teach you about Newfoundland culture through music, jokes and stories.

The members of the band: Paul Barry ~ bass guitar, Reg Williams ~ accordion/harmonica, Wade Jones ~ guitar/keyboard/ugly stick, Wayne Parsons ~ lead vocals/guitar, Mike McDonald ~ drums. The band has the talent to be much bigger than they are. They could tour, they could fill a bigger venue, they could have an ego. But they don’t.

“We have turned down some major major offers, but during the summer we are so busy; many of the band members work 7 days a week,” Mike explained.

You will see them in town extending their hand to help you aboard the water taxi and captaining the boat tour. They have “day jobs” and are the first to offer a smile or share a great tip about the place they are so proud to call home. No rock star complex here. With all of the band members working around the clock, it is a wonder they don’t just do one show a week and actually have a night off.

“It is a stress relief. Look at Reg, he has so many businesses and is so busy the guy doesn’t stop. But one thing about him, no matter how contrary he is or how tired he is, when on stage he comes alive and is happy again,” Mike explained.

The band members actually do this for the love of performing. They enjoy entertaining people and truly want them to have an amazing experience.

“We want everyone to leave happy and entertained… you’re guaranteed some laughs. It is not just great music. We relate to the people, we interact with them, we make them a part of our show,” Paul told me.

It is not just the talent of the band that is amazing, but also the soul. Wayne used nearly all of his very short and much deserved lunch break talking to fans dining in the same restaurant he was. After he left, the two couples were so excited that a member of the band took time to speak to them and thank them! They didn’t stop talking about it for the rest of their lunch.

Talent and heart, a deadly combination. Add that to the fact that each member is a self-taught musician yet play with such skill and passion, and I was thoroughly impressed.

“We are all self-taught. Wade has a degree in music but was self-taught first,” Paul told me.

To be able to jump from playing a traditional Newfoundland song like Sonny’s Dream into Ozzy Ozborn and Led Zeplin without a music lesson is astonishing.

“There is a difference between learning the theory of how to read notes and actually being able to play,” Mike explained.

There is a certain talent that cannot be bought or learned but is inherent within an artist. Each member of Anchors Aweigh possesses this talent.

“I can’t read a chart, but I can play (guitar and bass). I only have to listen to the song and I got it. You have to feel it. If I can’t play without looking at piece of paper I don’t want to do it,” Paul explained.

It is this type of talent that continues to blow people away, show after show.

“Being from Toronto, I have seen a lot of bands and have been to tons of performances and I can honeslty say Anchors Aweigh is one of the best shows I have ever seen,” explained audience member Dianne Fee from Toronto Ontario.

I managed to ask the entire band one final question: How long would you like to continue doing this for? Their eyes lit up as they answered without a moment’s hesitation:

Wayne: “As long as people keep coming to the show I don’t see any reason to stop.”

Reg: “Until I can’ do it anymore, until they are shovelling the dirt.”

Anchors Aweigh play at the Anchor Pub in the Ocean View Hotel in Rocky Harbour. You can catch them every Monday, Wednesday and Friday at 8:00pm through July and August, and every Wednesday and Friday at 8:00pm in June and September. Tickets are $25 and reservations are required as tickets sell out fast. You can book online www.bontours.ca/anchors-aweigh by phone 1-888-458-2016 or in person at BonTours in the Ocean View Hotel.