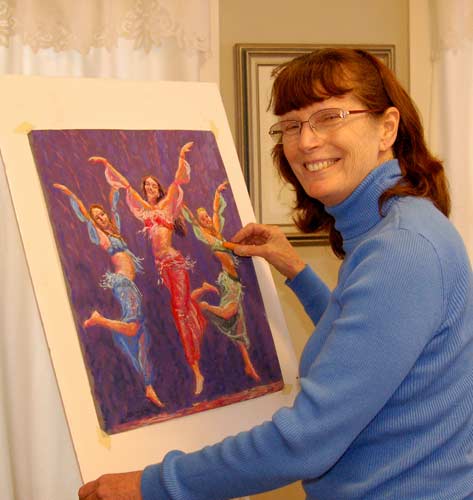 It is dawn in Gros Morne National Park and there is a thick fog creating a veil over the area. Slowly like a theater curtain, the fog begins to lift presenting to the world the striking beauty of the Tablelands. The bold, tall, rust coloured mountains thrust upward from the centre of the earth; they seem to be growing taller, reaching higher towards the Heavens.

This is one of the images that has kept artist Barbara Bellows coming to Gros Morne for over forty years.

“We kept returning for the beauty of the area, the diversity of geology and the marrying of mountains and the sea” Barbara explained. 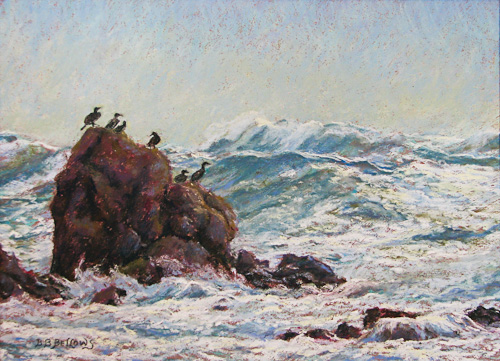 Barbara has been drawing most of her life and although she went to school for music, she found that she couldn’t stay away from art and took courses to continue to learn and grow. Barbara ended up teaching art at Lebanon College in New Hampshire for 15 years and became the head of the art department. It was just after she was married in the late 1960’s that Barbara first witnessed the beauty of Gros Morne. She had lived in many places in her life, but found Gros Morne to be exceptional and although she lived in New England, Barbara and her husband kept returning to Gros Morne.

“(We) especially enjoyed the drive by the Tablelands to Trout River and the ferry ride that linked the two sides of Bonne Bay and the park” Barbara explained.

They bought a summer home in the park and eventually found that the beauty of the people and the inspiration of the place felt like home and decided to move to Gros Morne.

“I need drama in my life. This is a wonderful way to get it in a creative and positive way.” she declared.

Barbara’s work is in League of Artists in Western Newfoundland (LAWN), shows in Corner Brook and her paintings can also be found in collections in the United States, Canada, Europe, and Central America. Barbara is currently painting land and seascapes in oil and soft pastel in a realistic/impressionistic style and also poured fluid acrylics in a contemporary style. With being an artist for so long and being so inspired by Gros Morne one couldn’t help but wonder if Barbara had a favourite piece of art work that she created.

“Sometimes a painting will speak to me me more then others, but that favourite becomes over-shadowed by the next favourite” she explained.

Gros Morne is an incredibly inspiring area for Barbara and she has no doubt that it will always continue to be.

“The changing seasons and light and clouds on the mountains and ocean continue to amaze me. I have been coming here for forty plus years and doubt I will ever become immune to its beauty” she explained.

Barbara’s work can be found in Java Jack’s Restaurant in Rocky Harbour, Neddie’s Harbour Inn in Norris Point, and Isalos Fine Art in Stonington, Maine. Barbara also has an art studio in the lower level of the Julia Ann Walsh Community Centre in Norris Point that is open to the public Tuesdays and Thursdays from 12:30-4:40 or by appointment . 709-458-3021 www.BarbaraBellows.com